A couple of weeks ago I saw that the DSTV mobile offering was being launched, not having a compatible phone nor having a contract due for upgrade any time soon it was with a little bit of jealousy. Then in the release article was mention of a little device that could connect to a laptop or iDevice – enter the Drifta.

I was rather keen to get hold of one of these devices so the week after launch I looked in the DSTV website, found the participating dealers and went to visit a few of them. Sadly none of them had a clue as to what it was (Yup, that’s you GAME, Pick n Pay, Incredible connection etc). I phoned the DSTV customer care and they couldn’t tell me who had stock either. Eventually I discovered that Makro had them listed and in stock (very useful function on the website). So last Thursday I went and picked one up. R599 later I had one in my hands. Neat little box too. 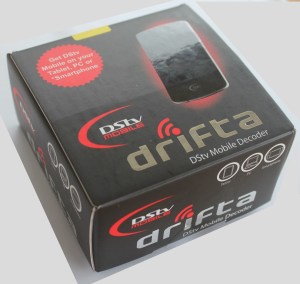 In the box is the install CD, a one page installation leaflet, a USB cable, AC adapter (connects to the USB cable), the Drifta and a battery. Popped the battery in and plugged it all in. 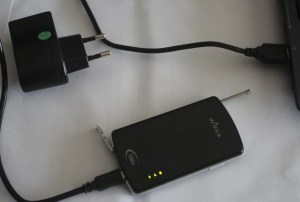 Drifta with usb cable and charger

I installed the software from the CD, had it all set up, the lights on the device were all correctly lit, but I was still getting error messages and no picture. Eventually an error message came up saying the signal was scrambled. At this point my son was reading the install leaflet a little more closely and pointed out to me that the device needed to be activated by DSTV before it could be used. Phoned through to the call centre, took a few transfers before ending up in the right place. Thankfully I already had a DSTV account (which wasn’t active) and they quickly got me set up and running. They stayed on the phone up until I had a picture. Good service. They then offered my a monthly insurance of R5/month on the device. My advise, take it. The aerial is really flimsy and will break soon. More on that later.

So with the Drifta up and running this is what appeared. 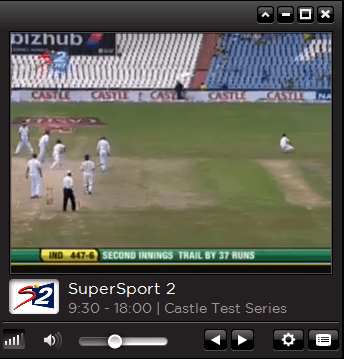 The picture is quite small. I am not sure what i expected, I knew it was meant for mobile devices so expected small, it is really small though. There is a “zoom” option, clicking it gives a little bigger picture, but it is a whole lot more blocky. 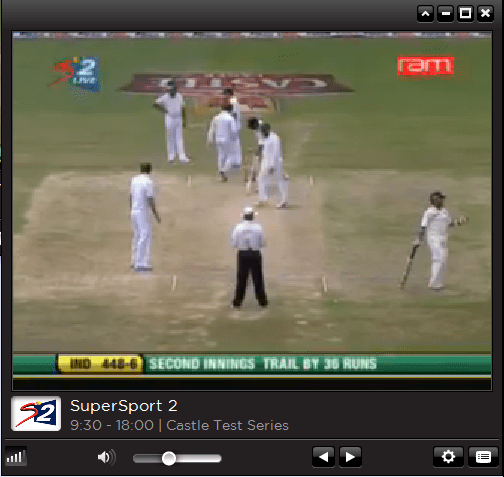 Next to the picture you can bring up the channel list and the schedule of upcoming programs on that channel. 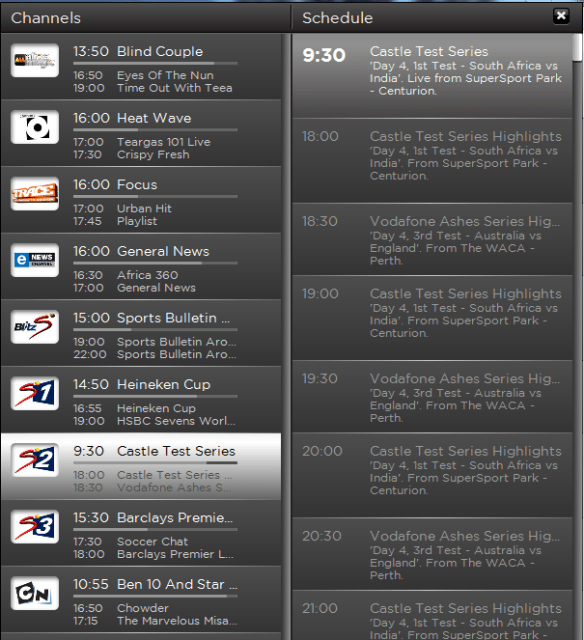 The number of channels if fairly limited. As you can see from the screenshot, channels available include :

I mainly wanted it for the sports channels, so to have Supersport 1,2,3 and blitz is quite acceptable. There is also e-news if you want to catch up on news inbetween the sport. As for the rest of the channels, not really much of interest there to me. For the price we will be paying, I think it’s a fair compromise and am quite happy with the value for money.

The player application also has some settings / options. Screenshots of these included below for completeness. 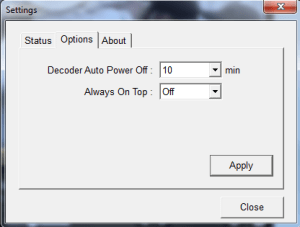 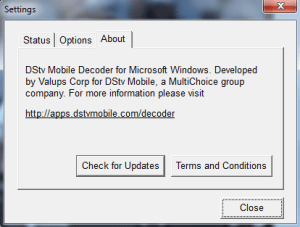 Using it as a mobile device

Now the Drifta is meant to be about mobile TV. While I am using it connected to the laptop rather than as mobile, it does support wireless streaming over wifi to iDevices (iPhone, iPod touch, iPad). I had originally though to use the wifi to also connect to my laptop, forgetting that I use wifi for my internet access, so if connecting Drifta this way, no internet access. USB works just fine and keeps the device charged too so Im fine with that. Connecting to the iDevices though means it’s either wifi or Drifta. Probably not an issue for most, be just beware of it. Battery life is quoted as being 3 hours, I haven’t tested that (read updated comment below in iPhone section). With the laptop it’s not an issue for me as it charges while being used.

So find the DSTV mobile application in iTunes : 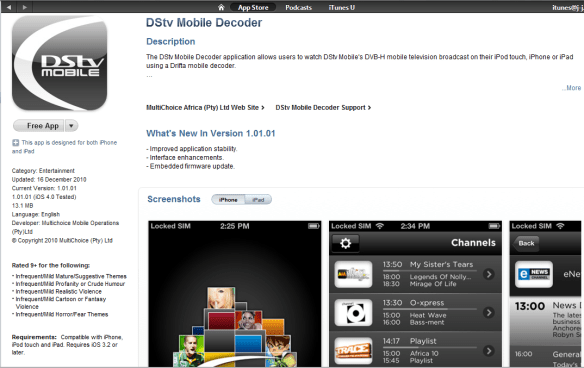 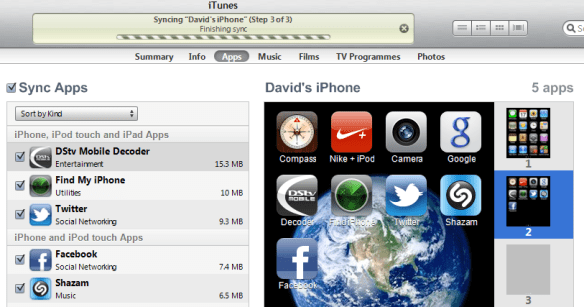 Once it’s synched across it’s all good to go. Just turn on wi-fi then load up the app. Turn on the Drifta and it sync’s to the device.  Once I loaded the up it checked the firmware version on the Drifta. Strangely enough, I had done this already from the PC client and it had said it was up to date, however, the iPhone version figured out there was a new version which it kindly downloaded and installed onto the Drifta before rebooting it. Once all done straight into live tv : 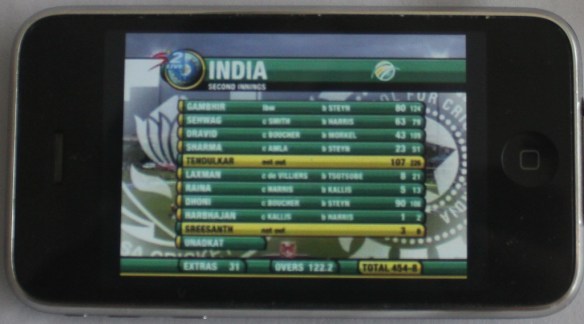 I was quite impressed with the picture quality. It actually looks better than what it did on the PC. I’m not a regular iphone user, so excuse the pics, they were taken with a DSLR and cropped down rather than just being screenshots. Still, the picture on the iphone actually looked better than on the laptop.

Touch the screen while the tv channel is playing and it pops up some info : Click again on the screen and you can pop up the channel selector and the programme listing screens : 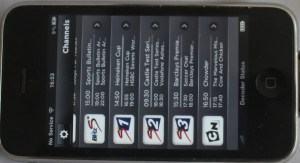 Overall the iphone app was simple, slick and worked really well. Can see this being a real gem for those who are out and about on the move and wanting to stay in touch with whatever sporting events are happening.

The range of the wifi signal is quoted as being around 15m and in practice I found this to be the case. The wifi signal is a little prone to interference, and when watching in the kitchen I did lose picture whenever the Microwave was turned on. It reconnected quite rapidly (within 5 seconds or so) once the microwave was switched off.

Having now been using the Drifta for 4 days, and had it running for probably 8 hours each of those days, I must say I am really impressed. Changing channels is a little slow, taking maybe 6-8 seconds to retune each time, less than the 15 seconds I had heard others quote. Also once tuned in the picture and sound are very stable, hardly ever losing synch. The sound quality was really great, with no breakup at all as I would have expected if it was an IP based streaming service.

It would have been nicer if the Drifta has an LCD screen and speaker/headphone socket. It would have increased the usefulness significantly, but i guess the cost would have gone up too. I would have paid a couple hundred extra for that, but maybe DSTV can do something like that next time.

As I alluded to earlier, there is a little bit of an issue with the design of the aerial. It really is flimsy when fully extruded. The design is a little strange, in that unlike a normal extension aerial, where the base is thick and the tip is thinner, it works in the reverse here with the thinnest end connected into the Drifta. When fully extended I really expect it to snap off at any time. Take a look in the pic below :

Thankfully here the signal strength is sufficient that I can leave the aerial only partially extended. This way the thickest part remains in the Drifta and the whole affair is a whole lot more solid and less likely to snap off. Would definitely recommend trying it in stages and leave it as solidly connected as possible. Well done to DSTV. This is a really nifty little device and I’m most glad to have it. It will be interesting to see if any further channels are added when it goes into a fully paid service. Still, even with those on offer I am delighted with it.

Resolution of the transmission:

The native resolution of the transmission is 320×240, and is limited to this by the bandwidth available in the DVB-H spectrum. While the application allows a zoomed in view, it just doubles the pixels. There is no full screen mode available. You can use the windows magnifier to zoom in further but it looks terrible. Better just to watch in the smaller window and enjoy it for what it is – a mobile service. Don’t expect an upgrade in the resolution any time soon, it seems this is not technically possible. The map isn’t that clear. There is coverage across :

You can visit the DSTV website for the interactive map where you can put your address in and see what coverage is available in your area :

This review has elicited an overwhelming response, way beyond what I had expected. I have taken many of the questions and answers from here and put them into an FAQ document which can be found here. DSTV mobile/Drifta FAQ Thanks to everyone for the contributions.